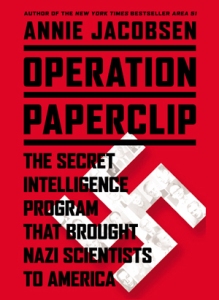 After listening to a radio interview this morning, apparently I am a year late, for the hardbound release. I understand that the paperback is released today for the book Operation Paperclip. I went to the website to catch up.

This topic was not new to me, but perhaps was last year to many of her fans.

This is January 21, 2015. While listening to the interview this morning, I missed the beginning of it with her. At first I thought she was Linda Hunt on the air, because of her book Secret Agenda [ St Martin’s Press, 1991]. Too, she mentioned things that I had not read or heard before, those being her interviews and the cold war years as “dark times” comments, that were “like now” and as there were “real unanswered questions” then , so are there now.

The late Michael Creighton also wrote a note on the Eisenhower quote to JFK “beware the military-industrial complex” and has said the real “beware” for our era is to beware the “politico-media complex.” He mentions the German scientists – in an appendix to his novel “State of Fear” on page 578 – as going along with the “state [nazi] policies” or they disappeared. Paperclip puts it all together of the need for the cover up at Roswell mushrooming into the UFO mythology, which was supposedly harmless compared to the revealing the truth of the operation, the German interrogations, drug and biological experiments of our own. I alluded to some of this in my novel The Doc revised edition, as I found Secret Agenda answered a lot of questions [1990 – 1991 in the years the “wall came down” in Berlin]. I wish Annie Jacobsen the best with the book, and I’ll get a copy.

1 thought on “Paperclip in Paperback”