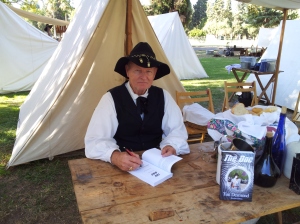 This is posted after the date of October 18 – 19, but that is all right. Since the story in the novel, THE DOC, is about Civil War re-enactors who are in trouble with Homeland Security, a Civil War reenactment is the perfect place to garner followers. This last of the 2014 reenacting season events in the San Joaquin Valley was at Kearney Park in Fresno County and hosted by American Civil War Association and Fresno Historical Society. It commemorated the 25th year of the annual event.

While each year a different battle is depicted, this year being 150 years since the Atlanta Campaign, that was the theme.

Of course the Atlanta Campaign brings up all sorts of images of the most talked about events of those months such as General Sherman’s march to the sea, after, of course, the burning of Atlanta, and the mass market success of the novel and movie Gone With The Wind. As there was so much more than all that, visitors to my discussions were shocked to learn of Western Theater, Army of Tennessee, General Joseph Eggleston Johnston, General William Hardee, and often ignored Generals Daniel Govan, Ben Cheatham, and Patrick Cleburne with their success as they battled at the many locations from Ringgold in early May 1864 to Atlanta by July 22. I was going to tell some of them what I learned from my Arkansan friend Bob H., at Shiloh in ‘07, “Get used to it, you’re in the south.” But, I realized I wasn’t really in the south, but in California. I had to settled on saying , “I could go on” and so that’s it for this, I could go on.

Thank you Fresno Bee, Fresno Historical Society, American Civil War Association, and Civil War Reenactment Society (CWRS) for continuing the living history event. This last event of the season in our area is always a pleasure to be a part of, with the entire involvement of our fellow re-enactors.
There is always more of course. This is not the last of the season’s events in California. While I would love to be in Franklin, Tennessee for November 30th and 150th Franklin, I have to settle for the Moorpark, California event on November 8 and 9, 2014. This is next to Simi Valley where the CA 118 West turns into the CA 23 South. It is at a different location this year at a different nearby ranch.
If you have more questions, contact me. 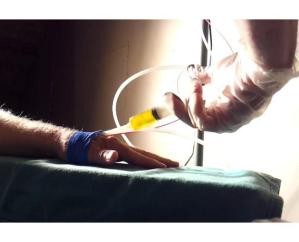 In researching for conspiracy theories, there seems to be no end. Using the theories as a story basis is hardly new, but one wonders if it is fiction any more. And of the old joke question about paranoia, “are you still paranoid If it’s true?” seems less funny these days. My driving was careful on the morning commute, yet while breaking to avoid a crash ahead, hot coffee spilled out of the loose travel mug lid. The odor of the splattered coffee was wonderful as I waited for the traffic to clear. In the predawn light during the wait, I turned up the radio volume. A caller was explaining that she turned off her telephone’s GPS app so she could not be tracked. The radio host explained to her that it really doesn’t matter if it’s off, that you can be located anyway. She was surprised and did not know that.
In the news and talk shows these past few days there have been the various takes on the “data collection” by various entities. Whether they are government types of the IRS, NSA, HUD, FHA, Social Security or in the private sector of your doctor’s office, employer, mortgage companies, telephone companies, credit card companies, social media companies, or search engine entities such as Google, Yahoo, or others. This morning was a statement from one media personality that “it is a done deal.” This being, or meaning, that the entire country if, not global, is already locked into the culture of the electronic technology and all the communication that is related in storage of the records and information. It is only a matter of how the data is controlled, and who controls it.
A year ago I had a frank discussion with one of my doctors. Out of respect for privacy, I won’t name the physician. There was a change in the doctor’s office system. I asked if it was because of the new regulations. The answer was partly yes. I mentioned then in the conversation, also the fact that a well known tax preparing company now has questions about one’s medical insurance that is part of the new IRS regulations as part of the Affordable Health Act. The doctor said he had not heard of that. I then asked the doctor if he didn’t think that the new regulations violated the federal HIPPA regulations, which are supposed to be in place to guard medical privacy. There was a moment of silence, and then he said, “I guess we all will no longer have that privacy.” I found the doctor’s comment disturbing. But, after today, I think I am the one that is the more naïve. The NSA thing was never news to me after 1986. But, the massive record sharing by entities of our telephone communication, banks, government, then also by the largest search engine companies tied to government agencies, is …. Please excuse the cliché …. “mind boggling.”
Usually I have links in these pieces. Just, Google or Yahoo any of the above items …… hah ……………
I sometimes am afraid to search some issues in my novel research. But, too, if it’s a “done deal” what more harm can be done? One might ask where it will all lead or end. But, the concern over conspiracies, “urban legends” nonsense, and any other movies and TV crap about any of this seems trivial, trite, and too late. Are we all to become “wards of the state?” Do you like this? Is this a done deal?
Timothy J. Desmond
Blog at: https://timdesmondblog.wordpress.com
Amazon author page at: http://www.amazon.com/-/e/B00694KQQO
Writing at: http://timothydesmond.wordpress.com
Art at: http://artbydesmond.wordpress.com

On replying to another blog post on NaNoWriMo, That is National Novel Writing Month, where you write your 50,000 word novel in 30 days. The other blogger said she got into it and was different, and driving her nuts, and she then had to do some prep work before continuing, and so on, in that way. Maybe some of you are seeing and reading that too. I commented: “Read this with interest, as I wanted to do the NaNoWriMo thing also after reading the book on the subject, before going to the website. I found the book by accident in a “Home Goods” store. So, I thought it was an omen.  I really appreciate all you said about your prep stuff. However, my understanding of the NaNoWriMo concept is that you can do all that after you knock out the 30 day 50,000 word version. As the title of the little book is: NO PLOT? NO PROBLEM. So, it’s only a technique thing anyway. I came across last week a writer’s argument about whether one works from an outline or not. So, that’s it. If one is going to do the NaNoWriMo, as intended, forget the prep.”